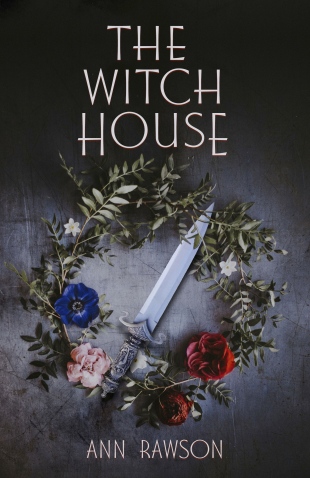 The opening line of The Witch House draws us into this twisty psychological whodunit with the death of someone familiar to the narrator, Alice Hunter. Alice’s day had been going down-hill in more prosaic ways before she discovers Harry’s corpse.

Alice may not be a reliable narrator. She doubts herself because she has been told she is unreliable. Should we doubt her, too? After her beloved grandmother’s death, Alice knows she set fire to many mementoes but she can’t remember much and evidence sometimes contradicts what she does remember. On that basis she was sectioned and spent months in a mental health facility. She’s still uncertain of herself, adjusting to relative freedom at last, when she find’s Harry’s corpse, laid out as if for a satanic ritual. Is it murder? Or has someone turned a natural death into a macabre spectacle?

Why are so many people, including the police, convinced Alice is the prime suspect in what may not even be a murder at first examination? Why do so many locals have so many secrets that involve Alice’s family? Her most trustworthy companion is a friend made during her stay in the dreaded institution who is on the run and comes to Alice for help.

The Witch House is deliciously complex, with fascinating characters. Alice has inherited the house from her grandmother, Frances Hunter, once a working class servant who, in her youth, discovered a Roman silver hoard, gave birth to an illegitimate baby (Alice’s mother, Helen), became high priestess of the local Wiccan coven and ran a respected business in the coastal town of Cuckmere.

Stiff-backed yet warm-hearted, Frances had taken in her granddaughter, Alice, as an infant when Helen wanted to live her own life, sometimes not bothering to visit Alice and Frances for months – even years, at one stage. When Helen was around, she undermined both her daughter and her mother given any opportunity. Helen is thoroughly selfish: whatever story she tells it will be the one that makes her the central victim, and she twists incidents to suit her without any second thought, gaslighting anyone who argues with her jealous imagination.

Now Frances is gone, Helen wants the house: as daughter it should be hers by right, she reckons, even though she has inherited other properties outright and the will was specific. Meanwhile, smooth-talking local politician and developer, Mark Stockman, is sure there must be more Roman treasure and Frances would have known where it was buried. All the characters seem to know more than they are admitting and several are adept at manipulating others.

As Alice unravels the tangled threads of The Witch House’s history and relationships, she finds herself in the centre of a web of deceit and discovers, in adversity, she is strong. If Alice isn’t responsible for Harry’s death, who is? If Alice is sane, who is mad? How far will they push their murderous intent?

Rawson’s narration is elegantly spare, letting her characters come alive through dialogue and Alice’s thoughts. Cuckmere’s coast and streets are a vivid setting for the story. The first chapter reminded me a little of the one Sophie Hannah novel I’ve read so far but after that I was captivated. (I know, I should read more Sophie Hannah because I will like her work eventually: my bad.)

I should confess that I’ve been a fan of Rawson’s writing for some time and I’m delighted to see The Witch House, her second novel, out with such an enthusiastic indie publisher as Red Dog.

Like Loading...
This entry was posted in review and tagged Ann Rawson, Red Dog Press, Sophie Hannah. Bookmark the permalink.

1 Response to Review: The Witch House, by Ann Rawson